Collingwood School is a primary school located in Essex, we were asked to tender for the renewal of the main pitch roof to the whole of the school. As part of this project we asked to enclose a glazed quadrangle which was unused by the school. This area suffered extremes of temperature in both the summer and winter months, being extremely cold in the winter and unbearably hot in the summer due to the vast amount of glazing.

A brief specification and preliminary designs were provided by Atkins Ltd who had been appointed by the school to run the project on their behalf, so as to produce a usable space for all the year round.

The pitched roofing works were straight forward and were undertaken as laid down in the specification. To the perimeter of the Quadrangle was a flat felt roof between the Glazed Quadrangle and tiled pitch roof. This was poorly insulated and the felt had started to break down.

Due to the expanse between each supporting wall and working from a structural engineer’s drawings, Kerto laminated beams were to be installed so as to alleviate any columns mid span.

Finishing’s to the room were complete with a new lighting system along with dado electrical trunking for computers etc. The area is now used as a library and computer room.

The completion of these works now allows this wasted area to be used throughout the school year and has since led to the redesign on internal walls within the school to allow maximum use of the space provided. Double L Ltd undertook the works to move the internal walls. 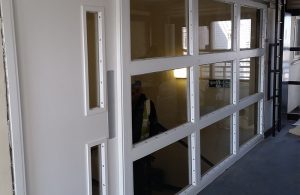